Almost as soon as the pregnancy test yielded a pink cross, I recalled the heartburn, the anemia, the scheduled C-section jitters and the difficulty with breastfeeding. For nine long months, I found the old bins of bottle and pump parts, washed the infant boy clothes, bought a new baby tub and took stock of what else we might need.

All I could think was, “Ok. Back to the infant chapter.”

When my little one, Theodore, entered the world, I thought I would know the drill. He was our fourth baby, afterall.

Yet there were (and are) still so many things I had no idea about.

Finding Gaps in My Expertise

Almost as soon as we were handed our youngest son, we were mostly left alone. The nurses didn’t dive in with helpful suggestions on holding our little one, swaddling him or getting him to latch for the first time. About day two of being in the hospital, I realized it was because this was baby four for us. The experts assumed we had been down this road enough to know our way. It was true that some things like diaper changes and midnight feedings came back easily.

But other things started to elude us.

On baby number four, I still called in the lactation specialist. I suppose this is a bit odd and even funny, but I was having a lot of difficulty with latch. I couldn’t remember the “tricks” they had given me with my other three. So, I felt better when the specialist said that Theodore had a lip tie and that was probably causing a poor latch. We worked on different ways to get him to latch and I felt better for asking for help.

When we brought Theodore home, I still had questions.

He was sleepier then what I remembered with my last three. And he had a terrible stuffy nose that made things even more difficult with breastfeeding. I felt like a novice and I didn’t feel as equipped for this little one as I had been in the past. I called the doctor more times than I would like to admit and worried a lot more about little things.

When we welcomed number four I realized that although we had been down the infant road before, we hadn’t been down it with Theodore yet. He was a new baby, a different child, and someone we had yet to get to know. He also made it known that he would not fall in line so easily behind his siblings. My husband and I reassessed our approach with him as we realized that he was all his own.

Theodore is now almost six weeks old now. I would like to say those first weeks with him are behind us and I now have it all together. But I would be lying.

Please don’t mistake my fertility and number of children with expertise. I still don’t have all the answers and I most likely never will. Now, if I can just figure out what helps Theodore sleep more than three hours at a time… 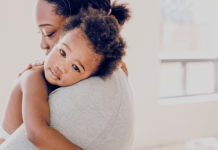