Not too long ago, I went to a bridal shower for one of my friends and was caught off-guard when one of the other guests suggested we all give our best marriage advice to the bride-to-be. I was youngest attendee by about a decade, and had only been married for a little over three years. What words of wisdom could I possibly have to offer? I panicked, but then remembered the tried and true advice I actually was using in my life: Put yourself in the other person’s shoes.

When you’re living your day-to-day life, it’s easy to simply focus on what is in front of you. Get to work on time, run that stats report, write some emails, make phone calls, pick your daughter up from daycare, cook dinner, start some laundry. Moms are experts at fitting a lot into one day, and we also have to open our eyes to see what others are doing with their days.

You’ll never see vacuuming on my list of things to do, because my husband has always done the vacuuming. We never sat down and agreed that chore would be assigned to him, it just sort of happened. So, really, I never have to think about the vacuuming; as far as I can tell, it just magically happens every other day, or so. He works hard to contribute to our household in a lot of different ways, and sometimes I have to put myself in his shoes to fully recognize those efforts, because I’m focused on my own. When I’ve cleaned the bathroom, gotten our daughter dressed and folded three loads of laundry, it’s easy to think to myself that I’m the only one putting in effort. That’s when I mindfully recognize what efforts my husband has been making when I’m not watching – usually, it’s more than I originally realized.

This is a piece of advice that has helped me a lot in my marriage, and even more since I became a mother. It can be frustrating to give my two-year-old a treat like a candy or baked good, and the first thing she says when she finishes it is, “Momma, I want more.” But, when I stop and put myself in her shoes, of course she asks for more! It’s a yummy treat that she doesn’t get often, and who doesn’t wish for more brownies? She’s a little girl who is still figuring out the world, and how to communicate her wants and needs. So, when she’s throwing a fit about not getting to crack the eggs for Thursday morning breakfast, I put myself in her shoes. She wants to contribute and be independent, and it must be really frustrating for her that she doesn’t quite have the manual dexterity to properly crack an egg.

When you feel like you’re handling it all alone, take a step back. Really put yourself in the other person’s shoes, whether is a co worker, spouse, child, just about anyone. What do they have on their plates? What contributions have the people around you made? Especially in marriage, if you still feel like the burdens are weighing more heavily on you, ask your husband to put himself in your shoes and recognize your contributions. Like I said before, it’s easy to take things for granted when they don’t happen right in front of your eyes.

What’s the best marriage advice you’ve ever received? Have you applied it to other aspects of your life? 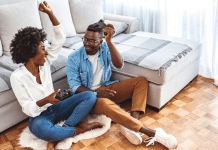