New Year’s Eve is one of those holidays that has changed significantly since becoming a parent. Gone are the days of meeting friends at bars. Heck, let’s face it—many of us don’t even see friends on this day, anymore.

It’s a family day like most of the other 365 days in a year. Based on a discussion among the contributors here at Colorado Springs Moms Blog, it appears that many of us stay close to home on New Year’s Eve to spend precious time with our kids. So, we decided to put our brains together and create a parent’s guide to New Year’s Eve, complete with ideas, printables and photos. A one-stop shop to make your holiday with littles fun and memorable. Want to impress your kiddos with a real-life, Colorado adventure tale?

“I think it’s amazing that people hike up Pikes Peak and set off fireworks,” says Kate.

It’s a cool story that started with a pair of brothers and three friends in 1922. They decided to climb Pikes Peak at night in the winter. They lit flares and fireworks at the top of the peak to celebrate. It became a local tradition that continues each New Year’s Eve by the Pikes Peak AdAmAn Club. The so-called Frozen Five coined the term “AdAmAn” because only one man a year could be added to the group — “add a man.”

These days, a party of 30 ascends the peak, test fires five shells in honor of the club’s five founding members at 9 p.m., then puts on a fireworks display for Colorado Springs at midnight. Even if the kiddos (or you) are in bed by then, you might set an alarm to peek out your west-facing windows for the show.

Erica loves kicking off the New Year with a family memory jar.

All year long, family members jot memories on pieces of paper and place them into the jar. They also include receipts and ticket stubs from their fun adventures. Her family looks forward to opening up the jar on New Year’s eve to reminisce about the amazing year they had! After Christmas each year, Kristal hits the local stores, looking for items on the clearance rack that she can repurpose for New Year’s Eve.

She relocates the Christmas tree lights, sets out black and gold tinsel, balloons and other decorations and confetti poppers. Finally, she builds an appetizer buffet. You can make your own or she supplements with goodies from Trader Joe’s.

“We end by You Tubing some fireworks from somewhere else,” she says.

Katie says her family usually takes all the ornaments off the tree on New Year’s Eve day and replaces them with New Year’s resolutions. They share them out loud to welcome in the New Year.

“We also have saved at least 85% of the air package cushions that we received from online shopping to do indoor fireworks,” she says.

Tabitha says she and her husband are going on a date to set goals for 2018 for their family, life and business. Families could do this together, too! Here is a list of questions to get you started.

“Or maybe make a new family mission statement for the year — what everyone will focus on,” she suggests.

Kristal says she has a friend who always hosts a New Year’s Eve party during which adults AND children make a collage vision board.

Rebecca uses printables she finds on the Internet to make the holiday special for her kids. “I’ve used a ‘kids year in review’ and a ‘kids New Year’s goals sheet.’ So fun!” (See our printables below!)

And did you know about the Noon Year’s Eve party, hosted by the upstart Pikes Peak Children’s Museum? Tabitha and Rebecca are both fans of this shindig.

This year, the event will run from 10 a.m.-2 p.m. Monday, Dec. 31, at the Colorado Springs Event Center. It will feature local vendors with S.T.E.A.M. activities, a silent auction, live entertainment, food, drink, music, dancing and a NOON countdown with a balloon drop and confetti. More information here.

“Super fun!” she says. “Something I would like to do is an early party for my kids around 9pm. Maybe make their favorite foods and have party poppers. Who am I kidding??? 9pm is better for me too!”

We are thrilled to offer this printable for your kids, created by our very own Event Director, Laura Forbes! Right click on the image below to download it, print and enjoy! 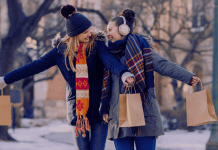 A Few of My Favorite Things: Shopping Local This Holiday Season 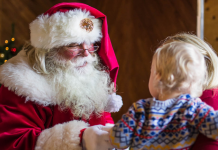