When I became pregnant with my second child, I dreamt about the relationship I wanted my kids to have.  After we learned our daughter would have a baby brother, I became worried they wouldn’t be as close as siblings of the same sex.  I know I am definitely closer to my sister than my three brothers. My children surprised me by becoming the best of friends!  However,  I never dreamt that I would become a third wheel to their daily antics.

My kids are now seven and five.  My role is merely providing food and playing referee.  Occasionally, I provide raw materials.  They wake up with plans and I never know how they come up with their adventures.  Often, the game continues most of the day.  Most days, I feel like they would be okay if I made no attempt at planning fun activities and playdates for them.  My kids have told me on many occasions that I am interrupting.  I often find myself feeling a little left out. For example, this week they have been playing “Slimy Family Reunion.”

My son often carries around a tiny shell from a lei that he found and named “Slimy.”  The shell turns up in the laundry often.  This reunion game started when they rediscovered a jar I had filled with that broken shell lei and placed on our craft shelves.  My kids, however, had different plans.  They quickly became engrossed in a world of their own.  The shells have visited dolls and stuffed animals in every room of the house.  My daughter put her doll on time out for repeatedly spilling the Slimy Family out of whatever “vehicle” they were riding in.  Yesterday I walked in to find they were “swimming” in an overturned LEGO lid.

I can claim responsibility for next to none of this fun activity.

What I Wanted for My Children?

Wasn’t this relationship all that I wanted for them?  For my children to enjoy each other’s company and become best friends.  Looking back, I know how we got here.  Our kids have space to make messes and time to be bored together.  We have worked hard to teach them how to resolve their own conflicts and treat each other with kindness and respect.

When I find myself getting lonely, I just listen from the other room to see what they are playing.  Then, I think of something that could add to their game.  Sometimes it is bringing the wooden blocks from the playroom so they can build a house for their cast of characters.  Sometimes I bring them a picnic snack.  This especially came in handy when they were deep in the world of Yogi Bear.  On some days, I  sit in the room with them and read a book or work on a craft project.  Sometimes, I just sit back and enjoy my wonderful little people and their big imaginations!

At times, I feel like this approach to parenting feels lazy.  Shouldn’t my kids be my number one focus as a stay at home mom? It is these times when I need to remind myself that it is my job to give them the skills to be independent in the future and it starts by teaching them to entertain themselves.  Therefore, I will enjoy that new magazine to the sound of my children’s laughter. 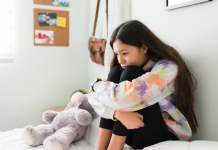