In its 34-year history, this is Cirque’s inaugural ice show. At its core, Crystal is the story of a misfit girl who discovers a confidence and passion she never knew existed. But in customary Cirque fashion, expect the unexpected in this fast-moving blend of technical skating and the stunning acrobatics upon which Cirque du Soleil has built its empire.

If you’re lucky enough to get tickets, arrive early. The fun begins before the official start time with a four-piece street band featuring an accordion, hockey players and a clown launching real snowballs into the audience. And it only gets better from there. Juggling, swinging, climbing, twirling, jumping and dancing—all to an eclectic mix of music.

My husband and two young sons (6 and 9) accompanied me and each of us enjoyed every moment. The kids loved the speed, physical comedy and danger. My spouse appreciated the athletes’ strength. And me? The storyline had me at “pen.” We were riveted. At intermission, the boys didn’t even ask for mementos or snacks. After a quick restroom break, they immediately dragged me back to our seats so they wouldn’t miss a minute of the action.

Turns out, we may be raising smart kids, afterall.

The main character, Crystal, doesn’t feel as if she belongs in her world. She makes a house of rice, so her peas will have somewhere to live. She’s a dreamer. People don’t understand her. They call her “weird.” So she skates away from it all. Out on a frozen pond, she falls through the ice, where she meets her alter ego.

Most of the story transpires in this fantastical underwater world. Crystal’s reflection tries to push her out of her comfort zone. To help her understand her own strength and brilliance. Eventually, she realizes that she is a writer and that through her writing, she can create anything.

As she writes, her characters become real. Hockey players skating and flipping through a life-sized game of pinball. Flying down steep, two-story jumps on steel blades. In another scene, a strong, romantic suitor descends from the sky, dancing with her on the ice and gliding through the air.

Her writing has transformed her. “I am someone else,” she says.

She is fearless. She is strong. And she can change the world with her pen.

Ice isn’t the only new addition to the Cirque lineup. Crystal is also the first production that has featured contemporary pop songs.

“The idea was to come closer to our audiences,” says Crystal publicist Julie Desmarais.

Cover versions of well-known pop songs created just for the show intersperse with Cirque’s signature-style music for a whole new feel. Musicians glide around the set, allowing the audience to hear, see and feel the presence of violin, clarinet, piano and other instruments.

Originally composed of 20 street performers in 1984, Cirque du Soleil has reinvented circus arts. The Canadian organization has entertained more than 180 million spectators with 42 productions in 60 countries. Cirque du Soleil now has about 1,300 artists from nearly 50 countries.

The show has at least one Colorado connection. Skating Performances Designer Benjamin Agosto, a world champion skater, was inducted into Colorado Springs’ United States Figure Skating Hall of Fame in 2016.

Crystal, which officially debuted  in December, will be at Broadmoor World Arena through Sunday. Easy drive. Easy parking. And the smaller venue puts you closer to the action. So if you can carve out a date night, go. Or if you want to hear your kids’ deep laughter and witness the elusive activity of having them happily sit in a seat for two hours, go.

Suspend time and soak in some inspiration about becoming your best you, whoever that may be.

Thank you to Cirque du Soleil for providing tickets to this event. The thoughts and opinions are 100% my own, and we at COSMB always partner with brands we love and trust. 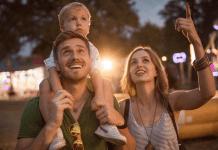