How different we all must be to create such a beautiful world. I sat at gymnastics one day, taking it all in.

To my right, a mom was nursing her baby, while behind me another was bottle feeding hers. A child two rows down got a spanking. Later, a different one from another family grounded.  One mom handed her son a hotdog and her daughter nachos, while the one next to her had smuggled in fruit and cheese sticks.

Some wore their babies on their chests, others carried them in infant seats. One mom took a cloth diaper out of her diaper bag before heading for the restroom, and another nearby had disposable ones falling out of her half-zipped Marvin the Martian (throwback) backpack.

I saw a little girl in a tutu, necklace and bow, and another girl with mustard smeared down her mismatched outfit. One kid asked if he could go to the bouncy slide and mom said, “Sure, go. I’ll come check on you in a sec.” Another (clearly older than the first) asked and his mom said, “You can’t go alone. I’ll take you later.”

Some women had one child, others of us had too many to count. Some were obvious gym-goers and had defined biceps, others were fluffier, and some just in between — and every one of them beautiful.

I love how each of us brings a totally unique style to the strongest coop on the planet. We’re all so different, but we’re all doing our best. I hope each of you with kids—be it four-legged, heavenly, or ones here on earth—think of your value. You are important. You matter. You’re strong. And you don’t need to compare yourself to any other mom on Earth.

Yeah, she’s doing it right. But so are you. 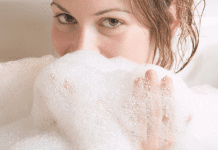 And What a Year It Was (Not Shaving)!