Sometimes plans don’t work out quite the way we, well… planned them.

We had a different plan for Christmas this year than what we ended up with.  But maybe, just maybe, it all worked out the way it was supposed to.

The grand plan was to have Daddy come home as he’s been overseas for the last 18 months. We were all going to go to Disney World together- a little family bonding for our family of five in the ‘Happiest Place On Earth’.  That was the plan…

Take that plan, add a little snowstorm and some major airline incompetence and we have a recipe for disaster.  After three cancelled flights three days in a row, two rebooked flights on another airline (at three times the original price!!), one cancelled flight that couldn’t be rebooked, and we ended up with only half our family making it to Disney.  It was definitely NOT the trip of family memories that my husband had envisioned for his few weeks home.

He ended up at home with our two teenagers (surly, hormonal people that sleep a lot and eat even more), while I wound up in Disney with our 4-year-old and my father-in-law.  Yes, you read that correctly.  My whirling dervish 4-year-old, and my (still very energetic) 75-year-old father-in-law.

This is where everything could have just been declared a disaster.  But we’re used to adjusting on the fly and making the best of things (that is one of the best things to come out of military life), so that is what we did.

I made sure the four-year-old had the Disney experience of his life.  There were no other kids to consider; it was all about him.  Which, had the whole family been there, it would have been much less so.  Let’s face it: there are very few things attractive to both a four-year-old and a seventeen-year-old.  So, this trip got to be all about him.  He got to have some great experiences for both him and his grandfather, two people that until now had spent very little time together.

My big kids got to have some one-on-one time with their Dad.  That’s been in short supply since the little guy came along.  They got him all to themselves.  They could play computer games and watch movies to their hearts content.  Their Dad took them to the movies and an escape room.  All things that are very hard with our whirling dervish preschooler.

Sometimes I think that life doesn’t necessarily give you what you want, but it gives you what you need instead.  Maybe that family vacation, which sounded so good, wasn’t what we needed.  But that the kids each needed something different and so the universe gave us a way to give it to them.  It gave each my husband and I the opportunity to give our kids, our very different kids in very different stages of life, what they needed. We each got to spend some special time with our kids doing what they wanted to do.

Don’t get me wrong, I’m still pretty mad at Frontier for the way they handled the debacle of our three cancelled flights.  But, as the time passes, I’m starting to think we were given an opportunity to make the most of a bad situation.

I’ve never spent much time with my father-in-law.  I got to spend three and a half days with him.  I got to share my youngest child, his youngest grandchild, with him.  I got to give my youngest the best possible Disney experience for the age he is now.  We did more character meals than we would have with the whole family.  All the rides and attractions we experienced were about what HE would enjoy, with no one else to consider!

My husband hasn’t been around much the last few years. He had a great chance to bond with his older children, without a monkey on his back (literally!).  There was no one to interrupt and hijack their activities.  They didn’t have to wait to do things until the youngest went to bed, or was occupied by something else.  They could come and go with ease, and take off for anywhere they wanted.  They could talk freely and get re-acquainted with out the distraction of the four-year-old.

Yes, we did NOT get the family vacation we dreamed of.  But maybe, just maybe, we did get what the kids needed.  And, through that separate but somewhat equal bonding time my husband and I got what we needed.  Our family is unique, so maybe it just goes with it that our family vacations should be unique too! 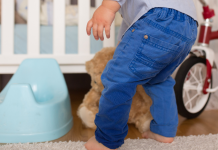