I rock this parenting thing… until suddenly, I don’t.

Last summer I hit my parenting stride as a veteran mother of three, I had gained confidence and skills. Or, at least that is how I felt. I had a well behaved four year old preschool graduate; a beautiful, happy two year old; and an easy, light up the room, 8 month old with whom I could leave the house for hours carrying just a diaper and prepped bottle. This was a drastic improvement from the 45 minute diaper bag prep period method I previously employed in order to leave the house just four short years before. I knew this one’s cries, his sleep patterns and happy times. When we left the hospital with this little guy, we got an approving “Oh, this is your third…” rather than the revolving door of lactation consultants, social workers and instructions on to how to get to the pre-discharge parenting class.

I had it going on and things were going great. Then, seemingly overnight, I found out that apparently it was all a façade and, just like that  I became the Kindergarten classroom idiot. Suddenly, we found ourselves incapable of getting our son to class on time, knowing when it was our day to bring snack, or that obviously there is a 2 hour delay when it snows?!? Having a “school-ager” has been a hellish version of Kindergarten boot camp. In his first semester, our “well behaved” son got my husband and I called to the principal’s office five times. Now, when I see that number on my caller ID, my heart skips and I begrudgingly answer to find out if my son threw another stick, was overheard telling his friend that “he enjoys not wearing any underwear,” (which for the record, was untrue. I check!) or just to let me know he had slid down the slide on his face…

As it turns out, you are supposed to bring the “homework” folders back to class (with the homework done) and I find myself constantly surprised to realize it is Friday yet again. I know this because it occurs to me when I drop my son off at class and see that EVERYONE ELSE is in their “mass dress”, with clean, white, button down shirts and uniform ties. Meanwhile, my son was just lucky to have found one of the ten sets of matching uniforms we bought. I was just glad to get out the door with two socks that met the length requirement and would pass as a pair.

Clearly, I am not cut out for this kind of responsibility. I have cried more since my son started Kindergarten than most Kindergartners do. The crazy ways in which I feel I have failed as a parent this year have been too numerous to count. On the day my son’s class took their first field trip, I remembered as I was dropping him off that he had to have a “booster seat” to go. For 20 minutes, I tried in vain to figure out how my son’s car seat, which I knew detached into a booster seat, was supposed to come apart. I cried big, ugly tears from the stress and frustration that boiled out of me as I marveled that 4 years of engineering school didn’t do me one bit of good in this situation. Until finally, an experienced mom to a second grader stopped and helped me out!

At this rate I am pretty sure my son will be graduating high school by the time I figure out the drop off line. Nothing else in my adulthood has prepared me for the thick skin I have had to grow to deal with being that mom who is frantically texting the “Kindergarten Mom Facebook Page” to ask the other moms if they know the new “afterschool” program teachers phone number because my husband and I both had meetings that ran long and we won’t make it there before pick-up.

What kind of parent doesn’t know the contact info for the person watching their kid after school?

This kind of parent.

The kind of parent with an hour commute or the one who first has to stop and pick up at preschool and daycare. The kind of parent who just started a new job and can’t take flex time. The kind that is in the middle of trying to get a house sold and move or who is pregnant and tired or whose spouse is deployed or any number of other crazy things that are happening in all of our lives all of the time. It may feel like every other parent out there is always on time and makes it to every holiday classroom party. I can’t be the only one who doesn’t bring homemade, healthy snacks from the “approved” list on their kid’s day to shine. I believe that must be true. So I will try to remember down the road to be kind, to support that other mother who feels like a hot mess and remind her that she is not alone in this crazy thing called motherhood. I will help her detach the booster seat from her car seat and tell her it will get better. Some day, I have faith I will again be a confident, veteran mom… at least until he starts middle school. 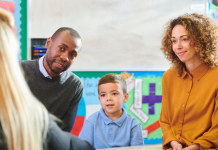