I realized the other day – as my daughter screamed, “I want my breakfast, daaaddyyy!” while I was changing her poopy diaper – that I had entered a different realm of living. While I’m doing something for my two year old, she’s already petitioning for the next thing… and the next. This is a strange reality.

“I want my Minnie Mouse cup now, daaaddyyy!” She really is an angel. It’s just that the economy of love on planet Earth doesn’t work this way. I’m accustomed to the way things ought to be; I’m supposed to get something in return. When I sat down to write this, I was tempted to lick my lips, slick my hair back like Jack Nicholson and type “All work and no play makes Jack a dull boy” cantankerously over and over. Parenting is vexing. Love like this really doesn’t make sense.

Loving a two year old is like exercising vicariously for someone else while your own body reaps no benefit and  instead, gets fat and flabby. It’s like paying for a stranger to go to college. It’s not high risk, high reward. It’s just lose, lose.

But if we cup our ears and lean in a bit, we can pick out another melody – a softer one that anticipates the whole composition. There are three harmonies of this melody I’ve heard while raising my little girl so far: sacrifice, steadfastness, and perspective.

This is a confusing word in our culture. It often invokes thoughts of moralism, pietism, and even glamour. It is exhausting to be a caretaker, and even more so when the beloved gives nothing in return.

Of course, I don’t expect my daughter to reciprocate. She’s two. Parenting is true sacrifice. Think of this: I may never even see the harvest of my toiling. What if I loved my friends, students, family members, and neighbors with this kind of sacrificial love that really expects no return on investment?

It’s not glamorous, it’s not fun, and it’s not cool. It sucks. But it’s the main ingredient in the meal of true love.

Immediately after our girl was born, I realized what most dads realize: I had two people to take care of now. My strong wife needed help during her difficult recovery, and my newborn couldn’t do anything on her own. By default, I needed to be the constant one, the one to remain emotionally objective and physically endurant.

Even though my wife has healed and my daughter is more self-sufficient now, I still seek ways to apply this new found servant role.

This, I think, is an imperative lesson to learn, especially for men and dads who are often caricatured as lazy and aloof. Men are particularly susceptible to faltering under the pressures of care taking, and we have a unique opportunity to serve our families during the child-rearing years. Raising a two year old while balancing the stress of everyday American life can quickly erode faith and logic. Because of my daughter’s explosive tantrums and perpetual neediness, I’ve learned how to be unflappable in a way I couldn’t have as a single or childless guy.

And third, I’ve learned to stop and see life with a fresh pair of eyes.

Some of the most enduring novels ever written are told through a child’s perspective. The Adventures of Huckleberry Finn, Peter Pan, The Chronicles of Narnia, and Catcher in the Rye, for example, all tell stories from a child’s viewpoint. This can be powerful outside of fiction, too. Consider two of the most indelible accounts of the Holocaust—such as The Diary of Anne Frank or Elie Wiesel’s Night. There is something profound and uniquely visceral about how a child perceives a situation.

Perhaps it’s because we easily forget what life is like when it’s accompanied by imagination, vulnerability, and innocence. Maybe we tend to confuse buoyancy with passivity, or peace with detachment. My daughter has helped me see and re-see situations and people with artistry, simplicity, and sensitivity.

I’m not saying that we ought to laugh through trials or somehow float above them. But fatherhood has taught me that it is possible to be childlike and mature, while avoiding naiveté and ultra-optimism.

Maybe the “terrible twos” aren’t so terrible. Okay, never mind. They’re difficult and sometimes nightmarish. But, if we’re attentive – there’s a lot we can learn about community, ourselves, and how they harmonize. Sacrifice, steadfastness, and a childlike perspective lead us on the path of abundant life.

Now, if you’ll excuse me, I’ve got to go change my daughter’s diaper and remind her that poop goes in the toilet.

Kyle Scott and his wife Dana have two girls – Elsie and Myra – and a golden retriever. He spent his twenties realizing a childhood dream, playing drums professionally with several artists and bands, crisscrossing the nation many times on tour, and recording on about a dozen albums. Meanwhile, he earned his bachelor’s degree in history and served as a Writing Fellow at the University of Colorado at Colorado Springs. He is currently a market research assistant at Focus on the Family. For more info or to have Kyle write for you, visit kyledeanscott.com. You can also follow him on Instagram. 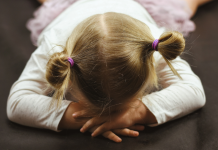 Pushing Through the Terrible Twos