My husband and I got married in Las Vegas. I came home with a black eye and a cut on my forehead. But not for any reasons you might guess.

Everything went according to plan until it was time for us to leave. We took the airport shuttle to the airport then we checked in and suffered through the long tedious security line. We had some time before boarding because our flight was delayed so my husband decided to duck out and smoke a cigarette. The Las Vegas airport has no “smoking section” inside, so he took his ID, his boarding pass and his cell phone and went outside.

I settled in to read, as we had been told we were not leaving Las Vegas for at least an hour.

Fifteen minutes later, they decided to send us out on another plane and we started to board. I texted my husband and told him to hurry up. He replied that he was waiting in the security line. I told the staff at the gate and waited for him. There was no way for him to take a different flight. I had his wallet and all of our luggage.

So everyone had boarded. The staff was ready to close the door. I texted my husband to see what the hold up was. Apparently, the photo ID that had worked just fine through security 2 hours ago was no longer OK, according to a TSA agent. He had been pulled aside for “additional screening.”

I was panicking. The staff promised to hold the flight, but asked that I go ahead and board. Crossing my fingers, I texted my husband what was happening and got on the plane. About 5 minutes later, here come my husband, panting, red and sweaty from having sprinted through the terminal. It took him at least 20 minutes to calm down. We tried to relax and enjoy the flight home from Vegas, but then things got worse.

We had a layover in Phoenix.

We got off the plane, grabbed a meal and my husband went for another cigarette. Then we went to the gate to wait. After learning the our plane was delayed (ARGH!!), we settled in to wait. I informed my husband that he was NOT to go anywhere this time. About 90 minutes later, we learned that no flights were leaving because there was a bad dust storm. Being from Colorado, I didn’t even know that was a thing.

After waiting in endless lines at the airline counter for them to find us accommodations, we got on a shuttle to a local hotel. As we were checking in, I mentioned that we had just gotten married and the manager was kind and booked us into their honeymoon suite.

We were pleased, but almost too tired to care anymore.

I headed into the bathroom to shower and get ready for bed. After removing my contact lenses, I stepped over a high tub wall into the shower. I should tell you that I have no depth perception without my contacts and, in fact, can not see much of anything that is not 3 inches from my face.

I finished my shower and reached for a towel. As I was drying off, I went to step out onto the hard, cold tile floor and misjudged the height of the shower ledge. I fell onto the tile floor on my knee with a loud thud and squeak of pain and surprise. So, I was on my hands and knees in the tiny bathroom, trying to figure out how to get up with my now bloody and painful knee. At that moment, my husband, having heard me fall, threw the door open and hit me square in the face with the door.

Now I had one hand on my knee and another on my face.

He helped me hobble to the bed and then went down to the night manager to ask for a first aid kit. After lots of ice, Tylenol and Band-Aids, we managed to get to sleep. But we had to be back at the airport early to catch our flight home. You should have seen the look on the hotel manager’s face when he saw me come down limping with fresh marks on my face. There was no quick way to explain what really happened. So I didn’t even try. He likely chalked it up to domestic violence or an overly enthusiastic night in the honeymoon suite. 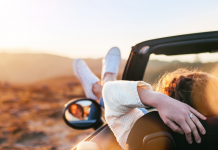